You try to be John Egbert and you fail, because you don’t even know who he is.

Damn, bro’, you’re missing something! Actually he is kind of a big deal!

You succeed in being the future Homestuck reader. (Because obviously you’re going to be)

In the near future, you’ll understand all what pesterlog, lusus and troll stuff are meaning… But now, let me tell you about Homestuck.

Homestuck (Ms Paint Adventure) is some kind of interactive webcomics you can read on Internet for totally free. It’s about lots of great shit like paradox spaces, games adventure, love, hate and some fucking crazy characters. Andrew Hussie, who started to write this in 2009 and has not yet finished, sometimes appears in the story as a character. For information, the comics is about 8800 pages ‘til now. In fact, at the beginning, it was going to be a simple short webcomics like another… but it worked so well it became the most read and known webcomics of times and spaces!

If you go check it out, (and I hope you’ll do) you’ll discover a strange layout… Generally, it’s divided into two parts: a picture, (sometimes an awesome video) and some texts, which, generally, goes with the pictures. I give you an example: it’s the first page.

BUT DON’T TURN MAD!! This drawing may look a bit simple but I promise you the whole comic isn’t like this! And yes, the entire thing is in English. (There is a French version but come on… it sounds crappy)

Well now… It would be pretty much too long to explain you the entire thing. To cut it short I’ll say that is a pal band who is starting a game…

The game itself, called Sburb, is on one hand the humanity’s end and on the other hand its only chance to survive. The heroes, (John, Rose, Dave and Jade at first) are going on a WOW ENORMOUS journey to deal with this world’s end. During this, they’ll meet some Trolls, who are looking like that: That’s a Troll (don’t read the following, you’re in the middle of nowhere)

These aliens are different of the Humans, for sure, and are talking in 4 dIfFeReNt wayyyyyyyy tHAN Us, for sure. >;)

Soon, you’ll discover they are in the game too… WOW so much cool guys to care about!!

Does all this Homestuck stuffy thing look nice? Do you have time to go and check?

You’ll find out! But really mate, this is a marvelous and colorful adventure to live!

Between you and me bro, can you resist to these guys bothering each other? Who strife to survive, who fight with chainsaw (wooops, lipstick) and who are going to make you discover troll’s romance quadrant? Trust me, you’ll be busy this year…

PS: The beginning of the adventure is kinda long to take place, but just be a little patient and enjoy!!! 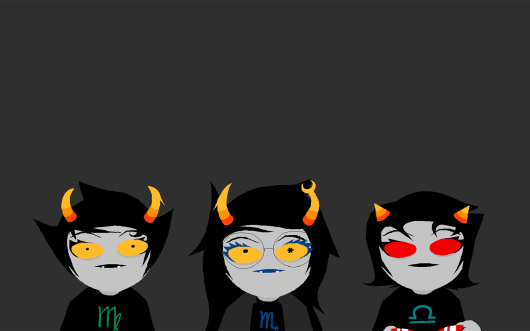